One of the many reasons I love my job as the White Sox team photographer is that I never know from day to day what new and unusual assignments might come my way.  I think many people categorize a team photographers job as that of just shooting game action.  While the game action aspect is an important (and fun) part of my job, there are many other photo related requests that I am responsible for handling as well.  The one that was waiting for me this past Wednesday was one of the more interesting and fun assignments I’ve had in a long time.

Omar Vizquel, our future Hall-of-Fame infielder, requested to have his photo taken in various ways and locations to honor fellow Venezuelan shortstop and MLB Hall-of-Famer Luis Aparicio.  The White Sox unretired the number eleven at the request of Omar so that he could wear it, with Luis’ blessing,  as a tribute to “Little Louie”  during the 2010 season.

As most baseball fans know, Omar made a name for himself as a premier major league shortstop, breaking into the big leagues with the Seattle Mariners from 1989 through 1993 and later starring with the Cleveland Indians from 1994-2004.  He later played for the San Francisco Giants and Texas Rangers before signing with the White Sox this past winter.

Dressed in his full home pinstripe uniform, Omar and I spent a half hour or so visiting different areas of U.S. Cellular Field for photos.  For those who aren’t aware, Omar is a very accomplished artist and photographer (shall I say Renaissance Man?), so many of our stops were a bit out of the ordinary as far as photo opp locations go.  But when you’ve got an eye for different, as Omar does, they ended up being quite unique.

More than a few stadium workers stopped in their tracks in disbelief as Vizquel, in full uniform, walked with me through the concourse as we checked out different vantage points and angles.  Obviously, we did this before the gates opened, but it still caught the help off guard as they were preparing for the 7:05 contest against the Mariners.  It’s not every day that you see a major league ballplayer in full uniform strolling through the ballpark. 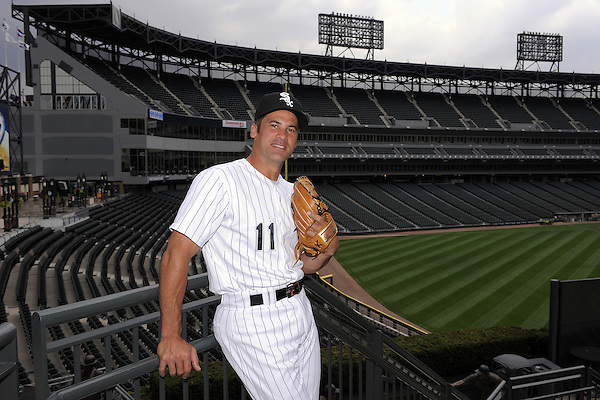 While the original intention was to photograph Omar with a tie-in to various White Sox in-house tributes to Aparicio, we ventured off the path somewhat when we encountered areas, angles or sight lines that caught Omar’s eye.

Thanks, Omar, for a fun 30 minutes.  You made my day.  And by the way, I’ve got a few more photo ideas we need to talk about!