A funny thing about photographing baseball is that you can literally go months without making a picture.  I don’t mean making the everyday, even if it’s a lousy game these will work because that’s all I’ve got kind of pictures.  I’m talking about making pictures!  Images that combine great action, beautiful light, clean backgrounds and creative composition that make up those special, hard to get, out of the ordinary, fun to look at kind of baseball pictures!.   To have the opportunity to make more than one during a game is even rarer still.  I enjoyed one of those special days a week ago when the Kansas City Royals visited U.S. Cellular Field to play the White Sox.

As the shadows from the upper deck began approaching home plate, I decided to venture up to the lower first base concourse.  I found a vacant TV camera platform that would work perfectly for what I wanted to do, which was to shoot with the light .  As summer fades toward autumn, the light finally gets nice in Chicago as the sun moves lower in the sky. And it’s on days like this (we have way too many cloudy days in the Midwest for my taste, as compared to my counterparts on the west coast who are spoiled with beautiful light on a daily basis) that I relish the opportunity to take advantage of the gorgeous light.

Enjoying the light I was working with that day, I was reminded of a comment made by fellow photographer and Director of Photography at MLB Photos, Rich Pilling, who once stated that “In light like this, bad pictures look good”!  He’s right!  Stock shots of fielders doing nothing at all look pretty damn good!  Ordinary can turn out extraordinary, while extraordinary becomes spectacular.

My equipment of choice was a Nikon D3S and Nikkor 500 f4 ED-VR lens with a 1.4 teleconverter.  This combination provided a perfect focal length for covering the entire field, but was admittedly pretty tight for action around home plate.  I made the decision to keep the teleconverter on, since my objective that afternoon was trying to make pretty pictures while shooting with the light.  I was about to loose home plate to shadows in short order anyway, so the decision was rather easy.  I’ve talked about making these lens choices and living with the decision in a previous blog (Lens Choices-The Long and Short of it).  But as luck would have it (or lack thereof), a potential play at the plate developed just as the shadow cut the home plate area in half. 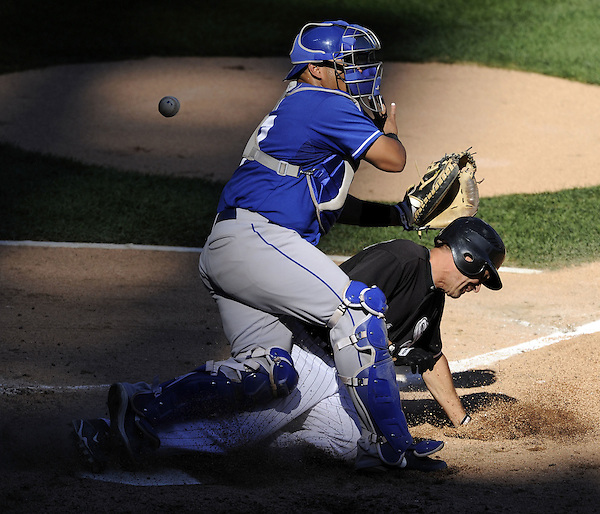 I shoot in manual mode all the time, and my exposure was set for the sunny portion of the field as I spun to cover the action unfolding at the plate, all the while knowing that the proper exposure could be a potential photographers nightmare since there was at least a 3 stop swing in exposure between the sun and shade.  Instincts took over as I made every effort to keep the play in the frame.  I was rewarded for my efforts with a unique and different home plate picture as Omar slid in safely, his body and face remaining in the sun as the ball, which happened to be framed by the not quite as brightly lit but lit just enough fungo circle near home plate, skipped past the catcher.

What would the result have been if I was shooting in one of the “auto exposure” modes?  Would I have been able to make this same picture?  I don’t think so.  Lucky perhaps?  Sure!  But making different and visually appealing sports pictures involves taking risks and knowing what you want ahead of time and planning accordingly, as well as enjoying a bit of luck.

This play was only the beginning of a fun day. The pictures would keep on coming.

I love photographing White Sox infielder and future baseball Hall-of-Famer Omar Vizquel.  He makes the game look so easy, it’s unbelievable.  Omar has earned 11 Gold Gloves for his fielding, and even though I’ve covered Omar since he broke into the big leagues in 1989, I had yet to make an image of him in the field that really captured his defensive prowess.  So with right handed hitter catcher Lucas May of the Royals at the plate, I thought it would be a good time to “sit on” Omar and see what happens.

This is what happened.

Some might say that I was lucky once again, and I will agree to a point.  I mean, I didn’t make May hit the ball toward Omar.  But as a photographer, understanding baseball and being into the game can make a difference.  Since May was a right handed hitter, I felt he would most likely pull the ball as most catchers do (the exception being the Twins Joe Mauer, who hits the ball to the opposite field regularly).  I felt my chances of having the ball hit towards Omar were pretty good.  Thanks, Lucas, for proving that my theory was right on the money.  More importantly, thanks Omar for starring in two pictures in two innings!

But there would be more.  Manny Ramirez was picked up on waivers by the White Sox a few weeks earlier, so naturally he was on my assignment “hot list”. For the first five innings I worked at field level.

Manny’s first two at bats provided me with a few decent images, but I could always use more.  By the time he came to the plate in the bottom of the sixth, the plate area had already moved into total shadow.  However his well known dreadlocks made for a nice silhouette as he reached first base after being hit by a pitch.  Don’t stop shooting when the action stops!

As the game moved into the top of the ninth inning, the shadow had already crossed the pitchers mound and was speeding toward second base.  With a Royals runner on first base and one out, I hoped that someone would hit a ground ball to give me a “photo opp” at second base before the shade completely enveloped the surrounding area.  As the sun advanced over the bag and the shadow took hold,  I thought I lost the opportunity I had hoped for but decided I had nothing to loose and kept my exposure dialed in for the light.

When a day is going good, everything seems to work.  Sure enough, a ground ball was hit to White Sox second baseman Gordon Beckham who gave a perfect feed to the Cuban Missile, Alexei Ramirez. Ramirez completed a force play while he unknowingly completed my day in fine style by leaping just high enough to avoid the sliding Lucas May and move back into the sunlight for one perfect frame.

I was disappointed that the game was over.  I was on a roll and experiencing a day I didn’t want to end.   Sure, the shadows would have completely covered the infield in a few more minutes, but left field was still lit beautifully.   Perhaps I could make a frame or two of a player reaching over the wall to rob someone of a home run, with their long shadow trailing the play?  OK, maybe I was getting greedy.  Could the upcoming series against the Minnesota Twins provide picture opportunities like I had this sunny Sunday afternoon?