During the last White Sox homestand I covered the unveiling of a larger than life statue of “The Big Hurt”, Frank Thomas.  It’s still hard for me to believe that Frank is now retired and the countdown toward The Big Hurt’s enshrinement into the Baseball Hall of Fame has begun.

I am fortunate to have covered Frank on a regular basis starting with his Major League debut back on August 2, 1990 at County Stadium in Milwaukee through his retirement from baseball on February 12, 2010.

Can it really be 21 years ago since that day in Milwaukee? Time really does fly by!  Speaking of that August day in Milwaukee, there is an interesting bit of trivia related to Frank’s debut that day.  Another young White Sox player was in the lineup during the first game of that twi-night double-header and broke into The Show with Frank.  Can you name him?

I can still vividly recall the impression Frank made on me when I first observed him in action in Sarasota Florida during spring training back in 1990.  I was impressed with his plate discipline probably more so than his power.  He most certainly displayed awesome power, no question.  But what made Frank unique in my opinion was his eye for the strike zone and his discipline by laying off “pitchers” pitches.

Not often do you find a big, strong, young power hitter with a keen sense of the strike zone who also had the poise and patience of a veteran.  Frank was never afraid to take a walk.  1667 to be exact.  I knew right then and there I was watching someone special.

Almost immediately, Frank became one of the most dominant, if not THE most dominant player in the game throughout the 1990’s.  Photographers never had enough images of him on file.  Frank was money.

Back in the days of shooting slide film, great chromes of Frank were valued like gold.  With his famous Walt Hriniak taught follow through (arm up, back foot off the ground), he was a tough picture to make.  I recall many one-handed home runs as he lunged over the outer portion of the plate to drive what the opposing pitcher thought was a pitcher’s pitch into the right centerfield seats.  Of course, with his right arm in front of his face!

Over the years, my position as White Sox team photographer gave me unprecedented access to Frank which translated into numerous opportunities for us to work together in the studio.  Frank was a spokesperson for Donruss Trading Cards during the early 1990’s and my relationships with Donruss (as a contract photographer) and Frank paved the way for me to photograph Thomas for many Donruss advertisements and point of purchase displays.

Whether as a fan or as a photographer, you didn’t dare head to the concession stand when Big Frank came to bat.  He was a game changer.

I still wonder how the strike shortened 1994 season may have ended had it been played out.  There are many who think the White Sox may have earned a World Series ring 11 years before eventually winning it all in 2005.

Frank never forgot those with whom he struck up a friendship with.  Even after moving on to the Athletics and Blue Jays, whenever he came to town, I was always greeted with a “Hey Ves” which meant a lot to me.  He was never too busy to stop by and say hello.

I’m glad I was there when Frank connected for milestone home run number 400 back in 2003, just another chapter in a story destined to have a storybook ending. 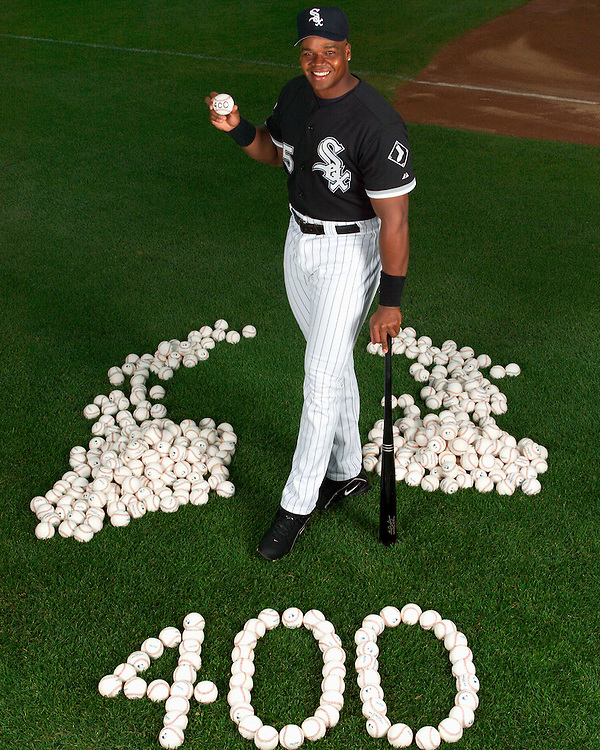 The two-time MVP (really it should have been three if you take away Jason Giambi’s tainted award in back 2000) finished up his career in 2008 with 521 home runs, 1704 RBI’s, an OBP of .419 and a slugging percentage of .555.  Hall of Fame numbers.  Frank’s number 35 was retired in 2010 but the White Sox didn’t stop there, honoring Thomas once again July 30 when they unveiled his statue.

I’m looking forward to my next appointment with The Big Hurt, most likely during the summer of 2014 in Cooperstown.  Thanks for the memories, Frank.  It was fun to watch a baseball legend become a legend, wire to wire.

Oh yeah, I almost forgot.  Who was the other White Sox player that made his big league debut along with Frank Thomas August 2, 1990 at County Stadium against the Brewers?

Hint.  He was a pitcher.